Our Silent Mind Technique™ is a method for eliminating the 'voices' (auditory hallucinations) of schizophrenia, as well as the typical 'mind chatter' or obsessive thoughts that many people experience. Our goal is to eliminate this terrible disease by making our approach available to therapists worldwide. 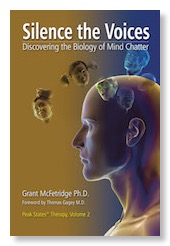 Our staff gave a talk about our treatment for schizophrenic voices at the 2019 International Society for Psychological Approaches for Psychosis conference in Rotterdam on August 26-30. We also gave a poster presentation on the same topic at the 7th European Conference on Schizophrenia Research in Munich on Sept 26-28.

Our new book Silence the Voices: Discovering the Biology of Mind Chatter was published November 2017. For more, see Amazon's 'Look inside the book'.

Although we have already developed two successful, well tested techniques (click here for treatment), we are continuing the research because we felt the treatment needed to be simpler and cover more (non-voice) symptoms in severe schizophrenics.
We are currently working on a new approach that makes the schizophrenic lose the voices and make them feel very safe in the world as well. This improved treatment also eliminates several other far more uncommon diseases that can cause some voice-like symptoms.

About the process:
Developed in 2010, the Silent Mind Technique™ is a well-tested process that permanently eliminates 'mind chatter' ("distracting or obsessive thoughts") in people. (If you are not sure what 'mind chatter' is referring to, a simple way to identify it is to do a 15 minute breath meditation (zen, vipassana), and note the annoying "random" or "distracting" thoughts.)
This process also eliminates the most common form of "psychotic auditory hallucinations" of schizophrenia. Surprisingly, these 'voices' are actually ordinary, everyday 'mind chatter', but are overwhelming because the client cannot suppress them like a typical person can.
We’ve discovered that this problem of mind chatter is due to a common fungal infection that interacts with in utero trauma - this problem is an epigenetic, not a genetic disorder. Two types of treatment are available: a fast and simple procedure that eliminates individual voices; and a psychoneuroimmunology approach that makes a person immune to the fungus, eliminating all 'distracting thoughts' or 'voices' simultaneously. The effects are permanent in either approach.

Getting treatment
If you are a mentally healthy person who is affected by obsessive thoughts, a 'noisy mind', or you 'hear voices', an Institute certified therapist can work with you, remotely over Skype if you prefer. This website lists therapists around the world, describes the treatment, the 'pay for results' policy, and covers other questions you may have.
If you are under medication, we recommend you work with one of our Institute clinic staff. This website lists the clinics you can contact, and describes the typical course of treatment. The client does not need to be able to follow verbal directions, but it is helpful.
No physical intervention is needed, no chemicals or drugs. We use state-of-the-art trauma healing techniques for the process.

Treatment results
Clients who have used our technique have written testimonials.

Ongoing research
We continue to work with volunteer clients to help improve our techniques. The experimental subject legal disclosure form can be downloaded here.

Schizophrenia is triggered by trauma
Conventional belief is that schizophrenia is a disorder of the neurochemistry of the brain, in spite of the fact that no such mechanism has ever been found. Recently, because of some landmark studies in the last 10 years, a major shift in understanding the cause of schizophrenia in psychology and psychiatry has started to take place. There are now excellent peer reviewed studies showing that schizophrenia has to be caused and/or triggered by trauma (just as we empirically proved by actually developing a technique that eliminated the problem of schizophrenic 'voices' by healing key trauma). We refer you to just some of the many peer review journal articles and articles:

PubMed lists related papers on trauma and schizophrenia in its database.

Voices in the general population
Of even more importance, the conventional model says that, by definition, if you hear voices ("auditory hallucinations"), you are mentally ill with schizophrenia. (A diagnosis of schizophrenia using the DSM 4 categories is not very repeatable from therapist to therapist, but roughly 70% of people with this diagnosis hear 'voices'.) Recent studies at NIMH in the USA show that 2/3 of the population that reports hearing voices has no other sign of mental illness whatsoever. Several other studies also agree with this. There is a 'continuum' that people are on - most 'schizophrenics' are totally sane, except that they 'hear voices' - the same voices that most people do. This is also in agreement with our own findings.

Our full model that identifies the intermediate fungal mechanism that causes 'mind chatter' also accounts for other very puzzling phenomena found by researchers who study schizophrenia. For example, some people deaf from birth also report hearing 'voices'. ("Hallucinations in Deaf People with a Mental Illness: Lessons from the Deaf Clients", by D Briffa, 1999, Australasian Psychiatry, 7(2) pp 72-74. A popularized article about people with this condition is "Hearing about the voices of the deaf", 2005 in Psychminded.co.uk.)
There is other data supporting a disease model for schizophrenia. Schizophrenia is rare or unknown in isolated tribes that had no previous contact with Europeans - but some years after contact it appears. For example, in The Institutional Care of the Insane of the United States and Canada (1916) pg. 381, it was noted that in 1827-9 there was no evidence of any mentally ill Cherokee before or during the period of their forced relocation (the trail of tears). As the psychiatrist Dr. E. Fuller Torrey writes in his Schizophrenia and Civilization (1980), this worldwide epidemiological data started being ignored in the psychiatric literature around 1950, probably because it didn't fit into the beliefs about mental illness at the time.

Other Approaches to Curing Schizophrenia

We've recently know of a client who had paranoia and voices that were successfully treated with a brain biofeedback approach - the results have been stable for a year. We don't know much about this approach yet, nor do we know what percentage of people this works for - but it is certainly worth checking. The organization is Brain State Technologies, and they have licensed their technology worldwide.

Revision History
Dec 23, 2015: Added the epidemiological data paragraph.
June 29, 2015: Added a video on the fungal cause for hearing voices. Shortened much of the text since we now have the therapist and clinic websites covering this material.
May 4, 2011: Revised the page to indicate that the Silent Mind Technique is now used by our therapists and clinics, and is past the testing stage.
Dec 16, 2009: Change in the status from initial testing to beta testing in our clinics; with certified therapists treating less ill clients.
Feb 4, 2007: Description of our test of the schizophrenia ‘voice hearing’ elimination process.
Therapists
Clinics