Understanding the Subcellular Biology of Epigenetic Damage and PTSD
Nov 12, 2014

One very important implication of this discovery of subcellular psychobiology is in the area of trauma (or the more severe version called 'post traumatic stress disorder' or PTSD). We normally assume that traumatic memories are somehow stored in neurological structures in the brain. However, it turns out that this is not the case. Instead, traumas are actually an indirect result of a particular kind of subcellular biological problem. Traumas form because of inhibited gene expression inside the cell nucleus. This physical problem inside the cell is experienced as an emotionally traumatic memory by the person.

To explain what 'inhibited gene expression' means in layman terms, we need to do a quick review of subcellular (inside the cell) biology. If all is working well, when we want to do something - say give a speech in front of people - the various cells in our body make the necessary proteins that allow them to do the actions needed. Inside the cell it goes like this: the cell signals that it needs a particular gene; that gene comes out of the nucleolus (it's like a ball of yarn made up of genes) to the inner edge of the nuclear membrane (the big ball in the middle of the cell that holds all the genes); then the histone protein coating is removed from the gene (like stripping insulation off of a copper wire); then an mRNA copy is made of the gene (RNA is a little string of stuff similar to DNA); then that mRNA 'string' goes out a nuclear pore (like going out an opened camera iris) into the cytoplasm (the fluid that fills most of the cell); then a ribosome (that looks like a crumpled potato chip bag) comes up and starts to 'read' the mRNA as if it were scanning some kind of old fashioned computer punch tape. This mRNA gives step by step instructions to the ribosome on how make that protein. When the ribosome runs out of string, the protein is done and the mRNA string and the ribosome dissolve. You can see this subcellular process in a 30 second clip of a video made at Harvard University:


So, that was a description of what happens when things are working well. But what causes trauma? 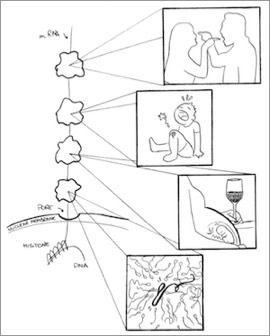 During a traumatic moment, we try to react appropriately: inside our bodies, individual cells try to create the particular proteins needed for the optimum response. However, genes that are needed for those particular proteins cannot be copied properly by the mRNA - the gene's histone coatings (the wire insulation) is damaged. The mRNA string gets stuck to the histone on the gene, while the other end sticks out of the nuclear pore, waving around in the fluid cytoplasm. So a ribosome goes to the end and starts reading the RNA code, but can't finish because it runs into the nuclear membrane. That stuck ribosome - the crumpled bag looking thing - contains traumatic feelings from that moment. Time passes, and on another day we face a similar situation - and we try again to make the right protein. But the gene is still stuck to the mRNA string; so another ribosome gets on the open end and runs down the string until it hits the earlier ribosome. Over a lifetime those stuck mRNA strings have rows of ribosomes, like strings of Christmas lights. Each of those ribosomes corresponds to a fixed moment in time when we were traumatized. If the mRNA string hadn't gotten stuck, we would not have gotten traumatized by whatever was happening at that moment - our response would not have gotten 'stuck'.

The average person has thousands of these stuck mRNA strings; this corresponds to tens of thousands of traumas, as each ribosome on each string represents a traumatic memory. To give you a visual impression, all of these many mRNA strings with their attached ribosomes sticking out of the nucleus look like a lot like seaweed covering the bottom of a shallow lake. 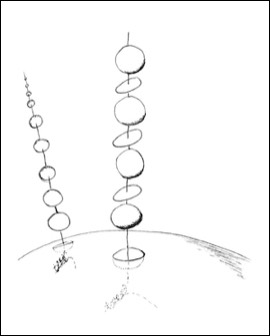 So far, we've just been talking about biographical trauma - painful moments that happened during your life. However, there is another kind of trauma with a similar subcellular 'inhibited gene expression' problem called 'generational trauma'. This type of trauma (involving an entirely different set of genes than cause biographical trauma) was formed in one's ancestors and got passed down through the generations to you.

But unlike biographical trauma, generational trauma causes cell formation problems - what is called 'epigenetic damage' by biologists. This term is used because the problem is inherited, but without actually having a damaged gene. The gene simply can't make the needed proteins because the histone coating around it is damaged, causing the mRNA to get stuck just like the biographical trauma genes - and that gene's histone protein damage is inherited.

Fortunately, there are several different subcellular psychological-like techniques that can repair the epigenetically damaged histone, freeing the gene which in turn allows the subcellular damage to be repaired. 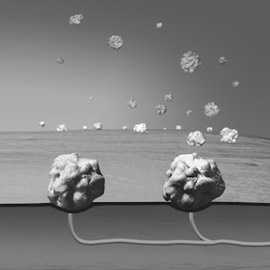 We've all heard of Pavlov's dog, where the sound of a bell made the dog salivate. But how does this happen biologically? It turns out that this phenomena is again also due to 'inhibited gene expression', but this time in a different set of genes. When the endoplasmic reticulum (ER), a membrane structure that sort of looks like a folded towel needs a protein, a gene is brought out of the nucleolus and an mRNA copy is made, just as with the other trauma types. This time, the mRNA goes out through a tube in the attached ER. But if the mRNA gets stuck to a damaged histone on the gene, the mRNA stays stuck in the tube, and a ribosome gets stuck to the end in a little cup in the surface of the membrane. The sensations of the association (in our example, the sound of the bell) are imbedded in the ribosome. This mRNA string also goes to other cups in the membrane where another ribosome is attached. This second ribosome has the sensation of the taste of food imbedded in it.

Looking at the ER from a distance, all of the many different associations due to different stuck genes make the surface of the ER look like it has pebbles imbedded in it - biologists call this 'rough ER' due to its appearance.

Understanding the biology of this type of trauma is extremely important, because body associations are the cause of most addictions.
Suggested reading

...or visit our Forum