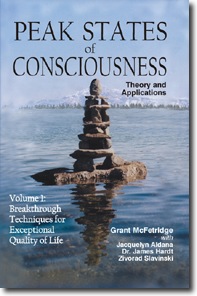 Pgs. 233-252: The single biggest change is the deletion of Chapter 11 on PEAT by Zivorad Slavinksi. After extensive testing, we've determined that the processes he uses only give temporary peak experiences, and not peak states.

Pg. xviii (Legal Liability Agreement) - delete sentence “The possibility that you may die from using these processes does exist."

Pg. 118: Upon later investigation, we found that the egg and sperm primordial germ cells (the precursers to the familiar egg and sperm) are actually created while the parent is still a blastocyst inside the respective grandmother. On page 118, line 17, the sentence should read: "A similar assembly of the brains occurs in the precellular developmental stage of the sperm, which occurs while the father is still a blastocyst."

Pg 121: The sperm (male) side is the right, and the egg (female) side is on the left. On page 121, on line 18, the words 'left' and 'right' were accidentally reversed, although the rest of the text is correct. The sentence should read: "If the problem is on the left, it's an egg trauma, and if on the right, a sperm trauma (assuming it isn't due to being hurt on only one sideo fhte body later on in life, of course!)"

Pg. 119: When Volume 1 was written, we had only found 12 precellular organelle 'brains'. However, in the last year we found that we missed two: the perineum brain (Pe) and the 3rd Eye brain (3E). On the diagram on page 119, they combine with the body brain before the solar plexus brain does, for both the sperm and egg.

Pg. 318: The entry for 'coalescence' in the glossary mistakenly identifies the time that coalescence occurs. It should say: ..."occurs inside the parental embryo shortly after it implants into the grandmother's womb, 9 months before the parent's birth.

Other treatments
(by certified therapists)

…or visit our Forum